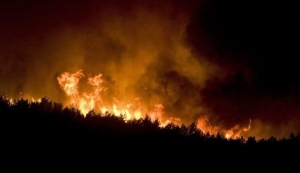 Along with casting blame for arson, the facts of the inadequate resources of Israel’s firefighting agencies are being discussed throughout the country.

Click onto the link for the article which appears in this morning’s “Ha’aretz”; Ilan Lior reports:

It was well-known long before last week that the firefighting service in Israel had serious deficiencies. Nonetheless a succession of government agencies, prime ministers and ministers of the interior and of finance failed to deal with the situation. A review of state comptroller reports, recommendations from professional investigative committees, deliberations by Knesset committees and correspondence among agencies all testify to the fact everyone foresaw such a catastrophe, but very little was done to head it off.

Foreign firefighting teams began aiding Israel Friday morning as it battled one of the worst fires in its history. The blaze is moving west, threatening a Haifa neighborhood and the Druze town of Isfiya.

The first to join forces were Greek and Bulgarian teams, which had arrived in the Ramat David Air Force base before first light. A British helicopter landed in Haifa later in the morning, having come from Cyprus along with a Cypriot plane and chopper.

on a personal note, my son was able to come home from Haifa this morning – the bus routes were open.